Kids went to school one day this week. This marks the second week this winter where the Loudoun Schools have only been in session for one day. Many members of the community are incensed at the fact that our kids have been kept home so often this year. They complain that it is “just a little snow and cold,” and where they’re from originally, this kind of “wussiness” in the face of winter wouldn’t be tolerated. 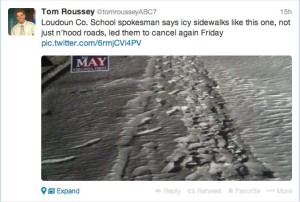 Funny thing about that, though: Where they’re from originally, there is a long-standing local commitment to the public’s responsibility to take care of public infrastructure, like schools and transportation infrastructure, at the public’s expense. Here in Loudoun County, Republicans who run the Board of Supervisors and the School Board, not to mention those in the House of Delegates, have no such commitment. On the contrary, there is an attitude of “Starving the Beast” when it comes to public services and investment. As if our children’s education were a Beast of some sort.

There is a direct relationship between the choices these Republican Boards have made, in terms of tax rate, County budgeting and LCPS budgeting, and the large number of “snow days” we have had this school year.

1. The Board of Supervisors decides on a tax rate based on the abstract goal of “cutting taxes” rather than a rational assessment of needs and a pragmatic discussion of how to structure county revenue streams to meet those needs.

2. As a result, the County Government has less money for essential services, including things like road maintenance and clearing. Thus, marginal decreases in the level to which roads are maintained and cleared in bad weather leads to icier, riskier roads in the western part of the County. Roads that Loudoun school buses are supposed to travel to pick up children and return them home.

3. As a corollary result of Republican Board policies, responsibility for road and sidewalk maintenance is frequently transferred from the County (a public entity) to HOAs (private entities) which do not have a social, public responsibility to maintain walkways and roads to the same extent a local government does. Neither do they have the tools and capacity to raise money for such needs that a government does. Thus, sidewalks and walking paths often don’t get salted and cleared.

4. As a result of insufficient funding, the School Board drastically cuts the LCPS transportation budget, forcing thousands more students to walk to school. The prevailing attitude seems to be, “good, that will toughen up those whippersnappers, why back in my day we walked uphill both ways in the snow!” At least, that’s the attitude up until the instant that it is their child almost hit by a car at a risky intersection, or falling and breaking their leg on an icy sidewalk. And then of course their neighborhood should get a bus!

5. Because thousands more children (including 5 year old Kindergarteners) are supposed to walk to school, LCPS Administration is wary of the risk to these kids on unmaintained sidewalks and under-cleared intersections during the busiest morning commute times. (And lest you think intersection accidents during morning commutes on cold winter mornings are nothing to worry about, I encourage you to subscribe to Loudoun Alerts and see how many notifications come in of such accidents every week.) Thus, when in doubt Administrators close the schools, in the name of children’s safety. A very, very valid concern.

6. Because students don’t have school, hundreds of thousands of parents (after all, there are more than 70,000 students in Loudoun Schools) have to rearrange their days to care for them. In many cases, that means taking a day off of work. That represents almost a million hours of lost wages and productivity for each snow day, assuming a parent stays home with their kid when they would have otherwise gone to work.

(As an aside, this Board was elected on a “pro-business” platform. I fail to see how defunding services and schools to the point where hundreds of thousands of parents might have to skip work for nearly a week at a time because of dangerous routes to school could be considered pro-business.)

There is no “Beast” to starve. There is only our public welfare, beaten and battered by the ideological extremism of a Board hell-bent on preserving their anti-tax purity. And our kids’ education, and workforce productivity, are the sacrifices this Board of Supervisors makes to that golden idol.

So the next time your kids are kept home from school because it is “cold.” Consider whether saving $10/month this year on your property taxes is really worth the price we all pay.

9 thoughts on “Taxes, Schools, and Sidewalks”