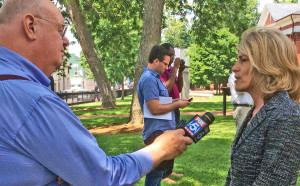 Thomas Jefferson wrote in the preamble to the Virginia Statute for Religious Freedom that “proscribing any citizen as unworthy [of] the public confidence … unless he profess or renounce this or that religious opinion, is depriving him injuriously of those privileges and advantages, to which, … he has a natural right.”

The First Amendment to the U.S. Constitution bars any government seeking the “establishment of religion, or prohibiting the free exercise thereof,” and that includes screening job applicants based on their religious beliefs.

Title VII of the Civil Rights Act expressly prohibits any government employer from making a hiring decision based on a job applicant’s religious beliefs, and Virginia’s Human Rights Act says the same thing.

Yet Ms. Stamos told a Circuit Court that County Supervisor Eugene Delgaudio could “probe” the “religious beliefs” of a job applicant.

Mr. Delgaudio interviewed Ms. Mateer at a Chic-fil-A in Sterling, and asked her “What do you think of home schooling?”, “Are you pro-life?”, and to disclose her religion.  Ms. Mateer said at her sworn deposition, “I felt [the questioning] was … extremely intrusive, to ask if I was Catholic …”  Ms. Matteer said she had to answer the questions a certain way to get the job, and failed to see how Mr. Delgaudio’s questions “had anything to do with the job” as a clerical and administrative aide.  Worse, this was how Mr. Delgaudio interviewed his job applicants.

Hundreds of citizens from Sterling signed a petition, objecting that Mr. Delgaudio was “impermissibly asking job applicants about their religious beliefs, in violation of the First Amendment of the United States Constitution.”

In Ms. Stamos’ view, you may violate an individual’s freedom of religion, “probe” their belief when hiring, on the off chance that they “might” say something you find disagreeable after they’ve been hired, whether or not it has to do with religion, and notwithstanding the individual’s federal and state constitutional right to speak freely.

Ms. Stamos cited one federal lower court decision from 2000 in Brooklyn, NY as legal authority, having absolutely nothing whatsoever to do with religious discrimination in hiring.

Nor did the decision abridge an employee’s freedom of speech because it involved a state legislator who fired his “policy making” community director for making personal public statements wrongly misunderstood to be the legislator’s views.

Ms. Stamos told the Court that “the Commonwealth does not believe that probing about an individual’s political and religious beliefs for a political appointment constitutes misuse of office.”

While the Court may have followed Ms. Stamos’s opinion, we respectfully suggest that federal and state governments disregard Ms. Stamos’ proposed hiring practices because religious discrimination in hiring remains as unlawful and as unconstitutional as the censorship or abridgment of a public employee’s freedom of speech.