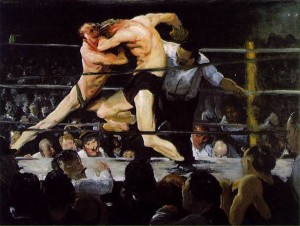 “Slippery” Scott is like a small club fighter who slips punches, shifts his stance to suit election year allies, tracks backward in the ring, the “Slippery” Scott shuffle, and, between rounds, his corner men treat his cuts, an expanding contributing entourage of developers, according to VPAP, including real estate developers, general contractors, highway contractors, building trades, excavation contractors, so they can have their hoped-for fifth round, more pay days by our County, for even more development.

Scott doesn’t, however, appreciate that he has a glass flaw, other than wanting to make more, wider, larger roads to favor his underwriters at the cost of making the County denser and less pastoral.

Scott has grown desperate like the pug who rubs his laces in an opponent’s eyes in the clinches.

“Shifty” Shawn, however, took a dive in the early qualifying rounds of the Republican primary, because Shawn’s past undisclosed bout was pounding his girlfriend.

“Slippery” Scott said he’d go for his fifth round re-election – to do otherwise, he said, would be “irresponsible.”

Soon afterewards, “Shifty” Shawn updated his mug shot because of another alleged assault.

“Slippery” Scott swiftly back pedaled away from “Shifty” Shawn.

Boxing may be called “the sweet science.” But what passes for politics at the Board level is more bitter than sweet.

We have no ref or rules to direct “Slippery” Scott to a neutral corner when he chooses to finance his re-election campaign fight at taxpayers’ expense.

“Slippery” Scott voted to spend $60,000 for the “design, printing and postage [of] an informational publication regarding transportation and transit projects; and direct staff to secure a contractor to produce the publication as soon as possible.”

“Slippery” Scott wants this “informational” flyer to hit the Loudoun households “as soon as possible” before the November election.

This “informational” flyer says about the same thing as “Slippery” Scott’s own campaign mailer, so he gets double the upper cut campaign punch for 31 “transportation projects.”

On September 10, 2015, “Slippery” Scott announced, “Sent out in the mail today! Listing all 31 transportation improvement projects for 2015/16 …”- and his campaign flyer mirrors the language and intent of the Board’s resolution for an “informational publication.” See the flyer at  http://www.chairmanyork.com/brochure.html.

Like any fighter or politician past his time who won’t retire, it’s time to knock “Slippery” Scott out of office.

3 thoughts on “Political brawling in Loudoun”