When a religious sect is integral to governance, it comes at the cost of intolerance toward those who profess any “disagreeable” faith; as for the “faithful,” they are manipulated by the fear that any dissenting word or conduct may earn them temporal punishment and bar their “eternal reward.” Constantine, for example, had the skin torn off bishops who refused to believe the communion host became flesh.

Walking through the glorious architecture of the holy churches within the Kremlin walls, you can’t ignore the seeming secular cast, as many “decorations” celebrate not anything spiritual, but the victories and achievements of Tsars and nobles, revered as saintly, with gold halos encircling their heads.

Overcome another nation, and a church is built to honor the victory – as did Ivan the Terrible when he built St. Basil’s in Red Square. 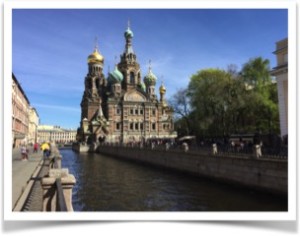 The Church of the Savior on Spilled Blood (Photo by John P. Flannery)

When a terrorist assassinated Tsar Alexander II in St. Petersburg in 1881, a most amazing church was built on the spot, and called the Church of the Savior on Spilled Blood (Spasa Na Krovi).

A world-conquering Christian religion defiles the teachings of the Sermon on the Mount.

No peacemaker, no child of God, may conquer and kill in the sign of the cross by the terms of the Sermon.

The hallowed ground within the Kremlin has been “sanctified” by centuries of spilled blood and spent treasure, and heavenly entreaties for victory, followed by extravagant demonstrations of thanksgiving for God’s assistance in vanquishing others, by erecting these glorious churches topped off with sky-scratching gold onion-shaped domes.

The icons are numerous, a kind of religious graffiti, climbing from the stone and marble floors to the exalted heights of the church.

It’s soulfully exhausting, when walking these grounds, amidst the unfolding beauty and wonder of the place, to meditate upon the evil done “in God’s name,” causing so many deaths.

It is an amusing irony that, though Marx and Lenin strongly believed that religion was the opiate numbing the people’s good sense and freedom, this religious display exists within the beauteous thick walls and gardens of the Kremlin.

Perhaps it’s because it serves the State to govern with the Church in a more subtle fashion than did the Tsars.

Unfortunately, those who are comfortable don’t question the irreconcilable interference of the sectarian with the secular, and our nation is most vulnerable these days, by those who insist religion should be central in government, rather than kept separate and apart, as our founding fathers insisted after our Revolution, and made law by our Constitution’s First Amendment.

Having observed how religion sanctioned by the state invites intolerance, repression and violence, we should honor separation, and insist upon it, and abide by our Constitution.