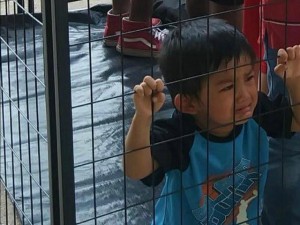 In your most imaginative and resourceful childhood, could you imagine what it would be like to be separated from your parents, and, perhaps for the first time in your life, think they can’t protect you, and find, in the best circumstance, that you’re helpless, hungry, cold, in a cage like you’d keep a dog at a pound, without hope that you’ll see your parents again if anyone knows who or where they are?

Politicians say these are not as bad as concentration camps.  Now there’s a standard as craven as any I’ve heard.

But this is a species of cruelty, no question about that, that comports all too comfortably with a kind of government that treats children this way.

So, this is Sunday, and it’s many years since I was a child and went to Mass in the Bronx every Sunday.  Indeed for a long time, I went to Mass daily, at 6 am, fasting as was the ritual then, before going to class.  The values were deeply imbedded in my soul.  I stopped when the values I cherished were not so evident in these places of “worship.”  I don’t go to church anymore – as Church I’ve found gets in the way of a spiritual experience.  But I still think about the charity that was at the heart of my religious upbringing.  I test friends and faux religious speakers by their acceptance of the sermon on the mount – a worthy set of values.

But where is that humane or religious sensitivity in the abuse of children at our southern border?

Echoing the words of the Sermon, if we are the salt of the earth, have we lost our savor, and are we destined to be trodden under the foot for having lost our way? END_OF_DOCUMENT_TOKEN_TO_BE_REPLACED

When a religious sect is integral to governance, it comes at the cost of intolerance toward those who profess any “disagreeable” faith; as for the “faithful,” they are manipulated by the fear that any dissenting word or conduct may earn them temporal punishment and bar their “eternal reward.” Constantine, for example, had the skin torn off bishops who refused to believe the communion host became flesh. END_OF_DOCUMENT_TOKEN_TO_BE_REPLACED

I believe, as the Governor said then, that “we can make it all the way with the whole family [of men and women, children and seniors] intact.”  This is a more worthy legacy for public service than what we’ve been getting.  Millions now have health care who didn’t.  The Republican leadership looks to deny that coverage. END_OF_DOCUMENT_TOKEN_TO_BE_REPLACED