Senator Orrin Hatch and your correspondent

I studied law because I wanted to be involved in politics.  Thomas Jefferson told a cousin who sought his advice that, if he wanted to go into politics, he should study the law.  I figured Jefferson knew what he was talking about.

My party preference was set when I heard Senator Jack Kennedy, running for President, speak at Fordham University when I was a High School freshman at the Prep. 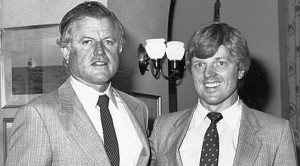 I didn’t give a thought to whether preferring one political party or another could bar one from public service.

In those days, you could find a worthy challenge in public service without regard to party affiliation.

In 1980, I was a Director of Citizens for Kennedy in New York, when Ted challenged Jimmy Carter to be the party’s nominee for President.  But it was not to be.

When I was appointed by Senator Hatch as his Special Counsel after Ted’s campaign, I arrived early to an empty Senate Labor Committee Hearing Room, except for Senator Kennedy who was the ranking member on the Committee.

Ted asked, “What brings you here?”

“I’m Special Counsel to the Senate Labor Committee,” I answered.

Ted came closer, speaking softly, in a mock conspiratorial way, and asked, “Does he know about us?”

Ted shook his head and hit his forehead softly with the palm of his hand – like he was surprised.

The truth be told, however, is that Ted and Orrin were good friends, disagreed about much, but did a lot of good on a number of significant policy questions affecting millions of Americans.

Together, they made it their mission to pass the Children Health Insurance Program (CHIP) to provide health insurance to children.

They joined together to help uninsured and underinsured AIDS victims.

They fought discrimination against the disabled with their Americans with Disabilities Act.

Both men were questioned by their colleagues, how a conservative Republican and liberal Democrat could cooperate.  But they remained friends and looked for opportunities to work together.

Orrin was savaged with charges of impropriety, later dismissed, but at a time when Orrin’s father was dying and then did die.

Orrin was avoided by his Republican colleagues because of the pending political charges.  Ted came to Orrin and talked about how he handled the deaths in his family and assured Orrin that these charges were groundless and would go away.

When Ted’s mother died, Orrin traveled unannounced to the funeral and slipped into the back of the cathedral.  The family brought Orrin up to sit with them.

In recent months, Orrin cast a backward glance on his relationship with Ted and how “something has broken in our politics.  Something that once moderated our partisan feelings and bridled our baser instincts has gone missing in an era of unprecedented polarization.  Something fundamental has been lost amid the chaos and disruption of the Information Age.”

Orrin lamented the loss of civility, “the public virtue that has greased the wheels of our democracy since its inception.”

The first step to make a course correction, Orrin said, was “to speak responsibly.”

Orrin was always a man comfortable in disagreement and encouraged everyone to venture beyond their comfortable confines, to resist sorting themselves by ideology and life style, and encouraging instead that we all be social with one another, as Orrin was with Ted.

Orrin said that Ted taught him “that the bonds of friendship are stronger than any partisan pull.”

Orrin urged us all to “choose respect and comity over anger and discord.”

This is a good standard for personal conduct.

It’s also how we should choose to elect our public officials in the near future and every election after that.