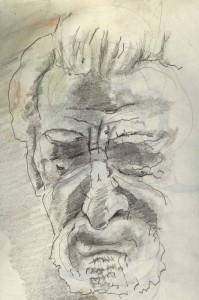 The Kate Spade news headline that Kate had taken her life prompted one lady close by to say involuntarily, “No, it can’t be.”  It wasn’t the purses that Kate designed, so chic, functional, artful, and “different,” though that was part of it, some have said.  It was how Kate made others feel, her vision of life, now suddenly ended.  Kate’s husband said, “There were personal demons she was battling.”

Anthony Bourdain, a past-celebrated chef with an appetite for more than the various foods and places and cultures and philosophies captured on his show, CNN’s “Parts Unknown,” gave his audience an adventure through his experienced vision, an opportunity to live his life that so many said they wished for themselves.

After his first marriage, Anthony wrote, in his book, “Medium Raw,” that he was “aimless and regularly suicidal.”  Was this what took him down so many years later?

We talk about mental health, but too easily attach a stigma to those bobbing up and down in a sea of struggling consciousness, among the various clinical diagnoses.

In Dante’s Inferno, “the souls of suicides grow for eternity in the shape of warped poisonous thorns …”

Society and the ill are told even today not that suicide is an illness, but rather a common law crime and immoral.

The ill are discouraged to talk about what ails them, to keep their mental illness to themselves, to fear becoming a pariah in a society that shuns to treat what it purports to care to cure.

The standard of care, reduced to its simplest, is not to be blasé when one acts suicidal, demonstrates out of control emotions, interpersonal storminess, feelings of emptiness, and impulsive behaviors, including impulses toward self-injury or injury to another.

Ignoring these signs, insisting that the signs are a manipulation, enables the mentally ill, to overcome, with repetition, their inhibitions against suicide.

Thomas Joiner, a distinguished researcher and the Bright-Burton Professor of Psychology at Florida State University, looks for four signs in patients: (1) when people beat back the urge for self-preservation, (2) are disconnected from others, (3) feel ineffective and (4) finally, they believe they are a burden on others, then these patients are at high risk for suicide.

A perfect storm of ill health prompted the suicide of Virginia Woolf.  She lost her mother when she was 13, her sister two years later, was sexually abused by her stepbrothers, believed herself so “unattractive” that “being wanted [was] a pleasure that I have never felt.”  Her London home was destroyed by Nazi planes, she got a terrible review for a book that meant so much to her, and she finally wrote her husband, “I can’t go on spoiling your life any longer.”  She loaded her pockets with heavy stones, and walked into the River Ouse, to drown.

Suicidal thoughts matter.  Belonging matters.  Believing yourself effective matters.  Not feeling yourself a burden matters.  And finding a clinician who knows how to help may matter the most.

(An excellent reference on suicide is Thomas Joiner, “Why people die by suicide?” as well as Kay Redfield Jamison, “An unquiet mind: a memoir of moods and madness.”)