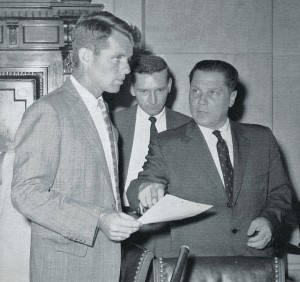 He paused, “These are times of danger and uncertainty but they are also more open to the creative energy of men than any other time in history.”

Bobby issued a challenge as his brother had at his presidential inauguration, to make a difference.

There was no sound as Bobby took the measure of his audience, saying, “Every one here will ultimately be judged – will ultimately judge himself – in the effort he [or she] has contributed to building a new world society and the extent to which his ideals and goals have shaped that effort.”

It was a time of turmoil, a nation trying to meet the promise that we were all equal, and to decide where and when and whether to war.  These were “times of danger and uncertainty.”

Bobby had investigated organized crime and Jimmy Hoffa the head of the Teamsters with a renowned investigator, Walter Sheridan.  That took courage for them both.

Bobby struggled to make civil rights a reality.  That took some courage.

He sought peace in the face of the Vietnam War.  To speak against war took courage.

Martin Luther King fought these battles in his own way.

Martin and Bobby – they were our heroes.

Bobby was fond of saying, “when the going gets tough, the tough get going,” and Bobby finally decided that meant running to become President in 1968.

The Reverend Martin Luther King feared he might not get to the Promised Land.

On April 4, 1968, a rifleman shot a .30-06 caliber bullet that broke Dr. King’s jaw, cut through his neck and spinal cord, and the slug lay spent in his shoulder blade.

Bobby insisted in Indianapolis on appearing before a crowd that had not yet heard of King’s death – in the days before instant communication.

Bobby told them he had lost a brother to senseless violence, and that we must “tame the savageness of man and to make gentle the life of this world.”

Two months later the savageness of man silenced Bobby in a California hotel; Bobby did not make it to the Promised Land.

I sat before a TV set into the early morning hours.

John Ellis was in California that night, it tore him apart like few who knew Bobby, and he was given the responsibility to organize a memorial train to convey Bobby from New York to Washington.

Senator Ted Kennedy spoke at St. Patrick’s Cathedral, quoting what Bobby himself had

said – how “some believe there is nothing one man or one woman can do against the enormous array of the world’s ills.”

Bobby didn’t believe that; he insisted, “It is from numberless diverse acts of courage and belief that human history is shaped. Each time a man stands up for an ideal, or acts to improve the lot of others, or strikes out against injustice, he sends forth a tiny ripple of hope, and crossing each other from a million different centers of energy and daring, those ripples build a current that can sweep down the mightiest walls of oppression and resistance.”

The question remains the same today, as in 1967, how do we judge ourselves?