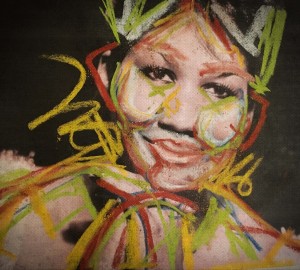 Respect is the mutual appreciation of the worth, of the virtue, of the character, of another.

Aretha Franklin, the “Queen of Soul,” sang in a glorious voice, the notes climbing to the heavens, a demand for a “little respect,” “just a little bit,” “whip it to me,” she sang, “sock it to me,” she cried out, holding her arms wide, as if to embrace everyone within sight, unable to stand still, moving, always moving, as she sang.

Aretha spelled out loud and clear what she wanted, so there could be no doubt, R-E-S-P-E-C-T, imploring everyone to know and understand, “what it means to me.”

Aretha looked out “on the morning rain” and felt so “uninspired” and so “tired,” felt her soul “in the lost and found” until she found her way to be “a natural woman,” and thus inspired other women to find what may have seemed lost to them.

George Washington, as a young man, wrote rules of “civility and decent behavior,” and his first rule was that “every action done in company ought to be with some sign of respect for those that are present.”

We are all too aware today that this virtue, to respect each other, needs to be refreshed.

Aretha toured with her father, C.L. Franklin, a Baptist minister, who preached social justice from his pulpit at New Bethel Baptist Church in Detroit.

Aretha arrived in Detroit, the Motor City, when she was 2 years old.  Rev. Franklin organized the 1963 Detroit Walk to Freedom, the largest demonstration in the United States before the March on Washington.

When Aretha wasn’t singing in her Dad’s choir, she traveled with him to churches through the South.

Aretha remembered in an NPR interview, how, in their travels, they ‘were asked to go to the back of the restaurant.”

In February 1960, in Greensboro, North Carolina, four African American college students sat down at a Woolworth whites-only lunch counter, to protest segregation, were refused service, and, when asked to leave, they remained in their seats, demanding respect.

The National Museum of American History has a display of the original seats from that whites-only Woolworth lunch counter.

The Woolworth lunch counter – for whites only

In the black and white picture memorializing these four courageous young men on one side of the counter, there is a young black man on the other side.  He is wearing a cook’s uniform, an apron and hat.

This young man’s head is slightly bowed, perhaps because he’s humiliated at the manifest contrast, feeling the terrible disrespect, how he’s expected to serve whites but not be served himself. 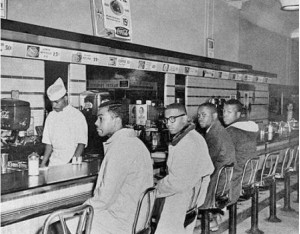 One of those sit-in students said, “Fifteen seconds after I sat on the stool, I had the most wonderful feeling.  I had a feeling of liberation, restored manhood; I had a natural high.  And I truly felt almost invincible.”

He said an older white woman came up behind him, and whispered, “I’m so proud of you.”

A case of random respect.

It was one of those protests that changed the history of America for the better.

Aretha had it in her performance contracts — she would not perform for any segregated audiences.

Aretha followed in her Dad’s footsteps.

She helped Martin Luther King however she could, to make payroll, to put gas in the vans, to perform 11 concerts and give the gate to “the cause,” to house activists, and to host gatherings at her home.

In 1970, Angela Davis was prosecuted as a terrorist, and Aretha reportedly posted Davis’ bail; ultimately Ms. Davis not only showed up as required by the terms of her bail, but she was acquitted of any wrongdoing.

When Franklin recorded “Respect” on Valentine’s Day 1967, it came after some respect had finally been achieved, after segregation had been outlawed, and voting rights better protected in the Deep South.

Andrew Young, a “lieutenant” to Martin Luther King, said, “Her songs were songs of the movement” and “the movement was about respect.”

Aretha worked to replace what was hard and hateful with what was helpful and loving.

We could use more of that respect she sang about today.

Now that she’s passed from the stage, from this life, we could best honor her memory by working on our respect for each other.