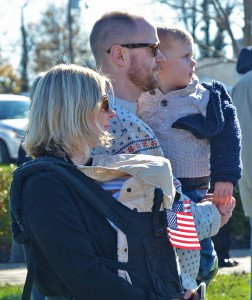 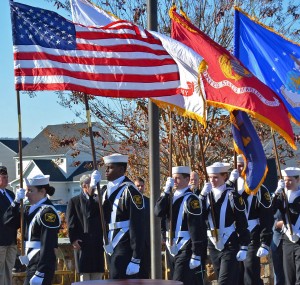 An honor guard, showing the colors of the armed services

Holly and her husband, Andy Norman, held their young children in their arms, Holly with Holly Holt Norman, 3 weeks old, and Andy had Henry Norman, their three year old, as the family stood fixed, watching the Veterans Day remembrance of the lives and sacrifice of service men and women.

“We were there,” said Holly, “dedicating a paver to my late father who was a U.S. Navy Seabee, Chief Petty Officer, Larry Holt.”

Holly’s sister, Keela Holt, flew in from Washington State for the ceremony.

The origin of this special day is the date ending the major hostilities in World War I on the 11th hour of the 11th day of the 11th month in 1918.

Later, the day was re-named Veterans Day but its origin is significant because it began with what President Woodrow Wilson insisted was “the war to end war,” and, “to make the world safe for democracy,” so that this, World War I, would never need occur again.

Wilson led the nation with the force of his Presbyterian forbears, seeking to rid the world of power-crazed autocrats and militarists.

Reverend M.H. Jagoe invoked the sentiment expressed by President Wilson when he prayed for the resolve to settle our differences “by peaceful ways and means.” 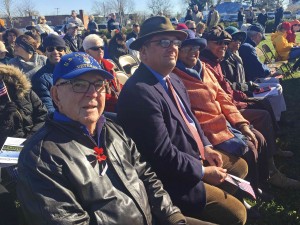 Lovettsville Came out for the Ceremony

Wilson in the last year of the war boiled down why we had to fight the war, with what objective, reducing his various arguments to 14 points to avoid another war, and a League of Nations, foreshadowed in his 14th point, that would discuss differences, recognize independent nations, and resolve to keep the peace.

Dissenters in the Republican party led by Senator Henry Cabot Lodge saw an over potent super state in Wilson’s proposal for peace and fought the League. Wilson fought back and broke his health in the bargain. The Senate did not ratify the League.

We have made efforts since including the United Nations but dissent and conflict, and wars remain, while we have treaties of peace still negotiated with some success.

Against this historical context, in our present world, the Lovettsville community gathered to hear Mayor Nate Fontaine convene the remembrance, to watch the flags fly, to hear our children sing, while our citizens sat in quiet respect for absent family and friends who served, and concern for those still missing in action, as young scouts distributed flyers, and one patriotic pug cavorted.