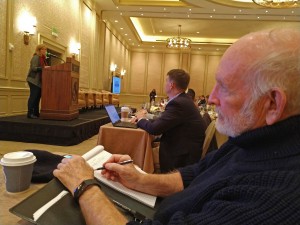 Middleburg Mayor Bridge Littleton said, “It’s all about the Comprehensive Plan.  The Comprehensive Plan is ‘the’ document which will govern land use for all Loudouners for the next 20 or 40 years.  It’s just as important to Loudouners in the East as it is to the West.  If we continue unconstrained development, it means worse schools, higher taxes, more transportation, and we destroy the Western Loudoun … we all enjoy.” END_OF_DOCUMENT_TOKEN_TO_BE_REPLACED

[Promoted by Liz. I’d like to see where this discussion goes. I also edited it so that the links work. And I added a link to Burton’s opponent]

We may believe that “money can’t buy you love” or possibly even happiness (although more are beginning to doubt this), but we obviously do believe it can buy you an election. So much so, in fact, that campaign effectiveness is often judged almost solely on who has raised the most money in the shortest amount of time. Is that true? Should we just add up the total amount raised and declare the winners without going through all the bother of stuffing envelopes, “dialing” phones, and knocking on doors in 100 degree weather? (Receipents of those annoying robocalls are probably shouting “yes!” at this point.)

Large contributions do convey a message: In the Blue Ridge District of Loudoun, the Republican challenger had not only raised $44,730 as of June 30 (including in-kind donations), but had already spent $34,300 of it. www.loudoun.gov/Default.aspx?tabid=344&fmpath=/Electoral%20Board/2011%20Campaign%20Finance%20Reports. She obviously must be expecting much more to come in; November is still a long way off. Almost all of these contributions are from real estate developers, brokers, agents, builders, contractors, financial management, attorneys and insurance — many of whom are located outside the District: (There is one Round Hill contributor listed as “farmer,” but when I looked up the name and address, an entity appeared on the web as “Financial Management Services.”) Three donors are from outside the County: Herndon, VA, Alexandria, VA, and Catonsville, MD.

This clearly represents a full frontal attack on the current zoning of western Loudoun. More housing development, strip malls, chain stores, office buildings and traffic. Is that what you want?

We have over 30 million square feet of industrial and office space approved by the county and waiting to be constructed now, in addition to the 14% vacancy rate of existing buildings. A “no holds barred” approach to unfettered growth could likely result in more stalled commercial projects surrounded by houses which will be sold on the promise of a tranquil life in (rapidly disappearing) rural Loudoun. After which it will be even harder to convince businesses to fill the vacant buildings, considering our biggest draw is the beauty that surrounds us. So, the commerce we actually get may very well come in the form of fast food, strip malls and big box stores to service a sprawling residential demographic that works in Tysons Corner.

Are you really ready to give up the idea of Smart Growth? (Drive slowly by Rt. 15 N in the vicinity of WalMart and Target before you answer.)

Although outside money IS intent on buying access to the open space, if you disagree with this goal, you don’t need to dispair of being able to defeat that intention since the conventional wisdom about elections being all about money is not necessarily true: I noted with interest that in the Leesburg Town elections last year, Mayor Kristen Umstattd was re-elected even though she spent far less than other candidates during her campaign (approximately $2.60 per vote received compared to challenger Dunn’s $5.50.). Similarly Councilman Kevin Wright’s tally calculated at only $3.75 each, while Reid spent a whopping $7.00. Winning does not always require heavy fund raising and expenditures; it can be done with experienced name recognition and a history of trusted service.

The incumbant, Jim Burton (I) has a 16-year history on the Board of Supervisors as a strong supporter of Smart Growth and the county’s Comprehensive Plan. Contrary to the other Blue Ridge candidate, all of the donors on his recent financial report actually live in the Blue Ridge District that he represents.

Why did you move here? Why do you stay? This year’s elections, possibly more than any other, will determine the future shape of Loudoun County. The choice is between quick speculative profits for outside development firms — or sustainable economic development for a diversified area. It’s time to pick a side and make a stand.

I won’t discuss the School Board in this post, because there are so many unknowns still. Many incumbents have said that they’ll decide what they’re going to do after the budget is done.

Nor will I discuss the House of Delegates or the State Senate races yet, since we still don’t know what the districts are for those races.

As I get more information about these and other races, I’ll post ’em up here.

UPDATE: Lloyd put up a post at TC about the state of the races from the Republican point of view. Apparently, one of the candidates for Sheriff dropped out.

Leesburg Today is reporting that the change in the population count for Loudoun County has thrown the debate about Magisterial (Supervisor) Redistricting into flux.

With Loudoun’s population set at 312,311, an increase of 84.1 percent of its population in the 2000 Census, the county has a population 22,036 higher than anticipated, which changes the sizes and potential boundaries for all eight districts and leaves supervisors with a lot more work to do.

An excellent, and extended, debate over Redistricting has been going on at Supervisor Miller’s blog, Without Supervision. If you want to get into the nitty gritty of potential District lines and census blocks, head over there and join the discussion.

I want to take a moment, however, to address a proposal which had previously been discarded, but is now perhaps back on the table thanks to the population results: Reducing the number of Supervisors.

It was Supervisor Jim Burton (I-Blue Ridge) who tossed the biggest wrench into the conversation of redistricting Monday, however. Noting that four of the nine supervisors had announced they would not seek reelection to the board and the board’s interest in keeping “communities of interest” together, Burton asked supervisors to reconsider the number of districts. When the board first began considering the redistricting process supervisors rejected the idea of either reducing or increasing the number of election districts from eight and one at-large seat for the chairman.

“I propose we look seriously at establishing six districts instead of eight. That would put each district at about 52,000. That would create one western district west of Rt. 15. Leesburg would have to extend outside of the town significantly. And it would leave four districts for central and eastern Loudoun,” he said. “It would make it easier to keep communities of interest together. The problems we have agreeing on boundaries and that four [supervisors] who are not coming back, I think that opens up the discussion.” – Leesburg Today

Reducing the number of Supervisors is a terrible idea. Follow below the fold for four reasons why. END_OF_DOCUMENT_TOKEN_TO_BE_REPLACED