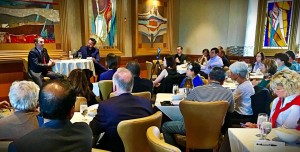 Among the “hard questions” posed, Dale Peskin asked Mr. Gillespie about his “attack ad” charging that Mr. Northam was indifferent to MS 13 gang crime, that he’d release gang members to the streets, and that he favored “sanctuary cities.”  No matter that there are no sanctuary cities in Virginia, that Mr. Northam opposes the creation of any, and that Mr. Northam supports prosecuting any and all crime, whether it’s the MS-13 gang or any other kind.  Mr. Northam said the ad was “despicable and inaccurate” and nothing less than “fear mongering.”  Later that day Mr. Gillespie campaigned with Mr. Trump’s Vice President.  Mr. Northam compared how Mr. Trump campaigned last year with how Mr. Gillespie was campaigning this year. END_OF_DOCUMENT_TOKEN_TO_BE_REPLACED