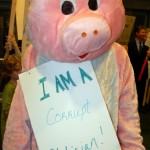 "I am a corrupt politician," says the pig.

As the travesty in Purcellville grinds on, we turn back to the curious case of the Loudoun Environmental Council. This new nominally “environmental” group still seems to have nothing to do with protecting the environment, and everything to do with protecting certain corrupt politicians at the expense of the adult conversation our county needs to have about safeguarding our water quality.

There was already much discussion here and here regarding the nature of this group. As before, my concern is not the merits of the proposed Chesapeake Bay Preservation Ordinance but rather the dishonest exploitation of the issue for political gain.

Responding to my criticism of LEC as an astroturf group set up to influence the 2011 election, commenters – of the sort frequent visitor Barbara Munsey refers to as “sockpuppets” – were dispatched to do damage control. A very enthusiastic one told us this:

..and the LCRC was at a meeting, so it was almost all non LCRC folks! Ha, that is the best of all… the rally conflicted with an LCRC meeting on redistricting and candidates presentations! The LCRC was not even there!

And did you hear Eugene, he was shocked as he looked at the crowd.. he said “Who are you all? I don’t know any of you?”..

Meh. Take a look at the pictures and see if you think that could possibly be true.

The “rally” in question was advertised by a Republican consultant/blogger/activist on a Republican blog, as follows:

Attend the RALLY: An activist group has scheduled a Rally against the CPBO [sic] at 5:30 at the government center (1 Harrison Street, Leesburg) on February 28th. Food and bev too!

It was similarly advertised by the Sterling Supervisor in his campaign materials, and on a Facebook page set up by LCRC members to oppose the CBPO. It was not promoted to the media via a press release, or otherwise advertised to the public – with the exception of the Republican-owned Purcellville Gazette, which apparently had inside information about the event. Some papers were unable to cover the rally at all, or had nothing but a LEC-produced video as a substitute for independent reporting. The lack of publicity was explained by the commenters here as “because the media wouldn’t give us any coverage anyway,” although that was clearly untrue.

The LCRC meeting was held at 7:30 that evening, so the rally did not conflict with it. In fact, most of the attendees left immediately after the rally instead of staying for the public hearing, giving them just enough time to get to that meeting. I suppose it’s theoretically possible that all those people who left together were “almost all non LCRC folks,” except that Jonathan, who took the photos in this post, says that he recognizes about three quarters of them from LCRC and other events. Whatever. I don’t know all these people, maybe you know some of them. Also, I haven’t named the ones I do know (except for one) and I’ve obscured the faces of children for privacy. I’m afraid I’m just not impressed by the claim that it’s inappropriate to photograph people having a supposedly public rally in a public building while a public meeting is going on. Deal with it, I’m sorry. These are most of the signs. They were all brought in one truck. This could be an LCRC car, or maybe not. What do you think?

As our former commenter reported, some people were visibly upset about having their picture taken. Some made an effort to avoid it. The guy in the white shirt was wearing his LCRC badge. He was one of those who didn't seem to want his picture taken. 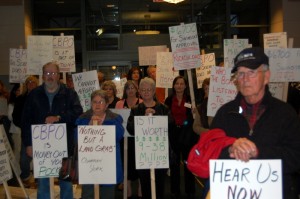 Just look at this clever fellow; torture is hilarious, isn’t it? This must go with the LEC video which was so classily titled “Cairo in Leesburg.” Recall that this was February 28, 2011, and be ashamed. The guy behind this sign is Patricia Phillips' husband. Points for recycling.

If we can’t agree on anything else, maybe we can all agree on this: These signs didn’t come on the truck – and they make a lot of sense to me. Of course everyone deserves clean, safe water, and there shouldn’t be more building permits where surface runoff is contaminating groundwater. That’s why we need to change the way we’re doing things, so this doesn’t happen to anybody else. These folks seem fine with posing for a picture, and why wouldn't they be? Two more LCRC activists who "weren't even there." 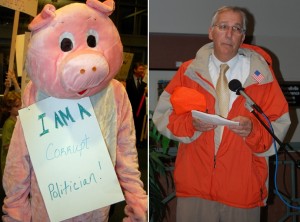 The claims made about this group by its cheerleaders, who seem to all be LCRC activists, are not convincing, in large part because they don’t even pretend to offer any solutions. A real grassroots group that uses the words “environment,” “clean air” and “clean water” would actually discuss those things and how we might work together to protect them, not merely fly the words on their website like little meaningless flags. I have yet to see any interest in finding ways to solve the problem – or even in acknowledging that a problem exists – but I see a lot indicating that LEC is just the latest incarnation of the acronym list in the title (can you remember what they all stand for?) If you think I’m wrong about this, please show me why.