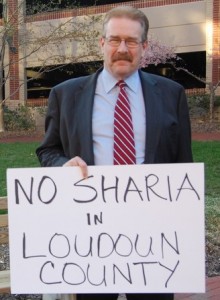 Repeat after me: Our Rs are kinder and gentler than this R

I was initially heartened at the near-unanimous condemnation of the pathetic little Pamela Geller-inspired protest we saw last Thursday night outside the LCRC meeting (photos below the fold). As I noted in comments, there was only one LCRC member (or at least a frequent attendee of meetings and events) who affirmatively joined the protest, plus a few others who appeared friendly with the protesters, while most just walked by or chose a different entrance.

One LCRC leader, by way of explaining what was wrong with the protest, informed me that target David Ramadan “isn’t even a practicing Muslim.” This may or may not be true – but that’s hardly the point, is it?

James Lafferty, leader of the so-called “Virginia Anti-Shariah Task Force,” has provided his own account of the protest and LCRC meeting (and no, he can’t spell ‘Loudoun’). The primary objection Lafferty expresses about Ramadan is that he made some remarks complaining about political opposition to the proposed Cordoba House in lower Manhattan (Ramadan describes the anti-Cordoba House campaign of Sarah Palin, Newt Gingrich, et al, as being an obstacle to his outreach efforts to the American Muslim community and to minority communities in general). Lafferty even goes to the trouble of saying that his group hadn’t “said anything about religion,” apparently making the point that he calls Ramadan an “Islamic Supremacist” because of political disagreement, not religious bigotry.

If the commentary from those local Republicans defending Ramadan can be summed up in the claim that he’s “not even a practicing Muslim” and that he never actually said that he supports Cordoba House, then you tell me: What is the substantial difference between the position of those local Republicans and that of this Pamela Geller offshoot hate group? The only real difference I can discern is that the hate group believes that Ramadan is a closet supporter of Cordoba House, while the local Republicans are only reserving judgment on that while advising Ramadan to distance himself from the issue. The visible difference, of course, is that the hate group was standing outside the Government Center holding odious signs and having their photos snapped by local media, while the LCRC was presenting itself as above all that, defending one of its own as a “solid conservative.”

If I were a cynical person, I might have to conclude that this is a very useful scenario. After all, its current incarnation is the most radical LCRC in recent memory. Given the choice between a polished professional with “extensive government experience” and a crude street theater stunt buddy of Eugene Delgaudio, the committee chose the latter as their new chairman – making it clear that the “Black Brigade” is in charge. The truth is that anti-Muslim sentiment is rampant in the organization – the constant use of language like “9-11 mosque” and “Ground Zero mosque” to refer to Cordoba House is sufficient evidence of that. These fictive phrases were created by the Palin-Gingrich-Geller campaign, are every bit as fanciful as the phrase “death panels,” and our LCRC friends casually use them as if they actually describe something. Heck, I even had to banish an activist into moderation on this blog for using anti-Muslim slurs.

I humbly submit that what we are witnessing is an exercise in “moving the goal posts” – perhaps even a staged one. In substance, there is no difference between the talking points in the flyer being distributed by the “Anti-Shariah Task Force” and the remarks by Frank Wolf at the Peter King hearings, remarks that only served to substantiate Wolf’s affinity for anti-Muslim civil rights activism (compare this to the reality-based approach to radical Islamism taken by the Obama Administration).

If the LCRC can position itself nominally in opposition to an outfit like Lafferty’s, it will look moderate by comparison – the new “normal.” That was the point here, and why I suspect there may have been more cooperation than consternation in certain quarters over a few protesters waving “No Sharia in Loudoun” signs.