Virginians are closely divided over whether gay marriage should be legal, according to a new Washington Post poll, a striking result in a state that overwhelmingly agreed to amend its constitution to ban gay marriage just five years ago.

The results mirror a dramatic and rapid shift in national public opinion about gay rights in recent years.

Dramatic indeed. Here are the national trendlines, via Nate Silver:

END_OF_DOCUMENT_TOKEN_TO_BE_REPLACED

Loudoun Streams has a post up summarizing the end result of the comprehensive review of the Chesapeake Bay Protection Ordinance (CBPO) that the Board of Supervisors has just completed. Some notable details include the fact that the Board compromised on a 75 foot buffer, and added a slew of exemptions for existing development plans, farm buildings, playsets, sheds and gazebos.

The process of public input, stakeholder discussions and detailed review by our elected officials is actually working, as each of the major and valid criticisms (e.g., buffer size, playset exemptions, owner notification, stream mapping) has been addressed in turn by the Board..

After revisions to the draft ordinance language are complete, the Board of Supervisors has directed that landowners affected by the RPA will get notice letters. According to the schedule proposed by staff, public notice of the proposed draft regulation will be advertised in the newspaper twice before the Board votes to adopt the draft. Final action is tentatively planned for the second Board meeting in July.

Developing this ordinance is only one of many steps that the Board has taken to protect our streams. The County also has plans to work with residents on a pilot watershed program which among other things could highlight voluntary measures homeowners could take to improve our streams. – Loudoun Streams

Since I couldn’t get the Virginia Redistricting site’s interactive map to work, I spent some time this morning playing with shapefiles and viewing software, along with my computer’s screenshot capabilities. As a result, I present to you the maps, as I understand them, of Assembly Districts (Delegate and Senate) in and around Loudoun County, Virginia.

(Incidentally, Hampton Roads online has a fantastic zoomable map, but I think the data on which it is based is the vetoed plans, rather than the passed, compromise plans from April 28th.)

First, Delegate Districts, as determined by the compromise plans passed on April 28th.

Hopefully, this will help inform all of the, “wait, does that candidate live in this district?” discussions going on. There are two more images below the jump that dig down into a bit more detail in the Ashburn Area, for people interested in where those lines really fall.
END_OF_DOCUMENT_TOKEN_TO_BE_REPLACED

Al Nevarez and Valdis Ronis have launched their new websites!

Go check them out.

Loudoun flags are flying at half-staff this week for Warren Geurin. 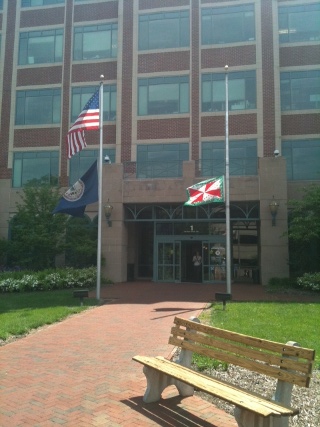 There are tributes to him at Loudoun Times Mirror, Leesburg Today, John Stevens’s blog, and at my husband’s blog.

She is so much fun to walk with! We did doors for about 3 hours on Saturday, and then she ran out of lit, so we stopped for the day. I emailed her more walk sheets for Sunday.

Speaking of Sunday, did anyone get an odd message from two of the LCDems lists that day? If you did, please let me know. liz (at) millerhousehold (dot) com.

In short, about the news that came out overnight regarding the demise of the world’s #1 Most Wanted terrorist, I suppose the tired meme ”President Obama is soft on terrorism” can be put to rest now, huh?

Kudos to our American military, the CIA, and all who worked diligently to see this day through.