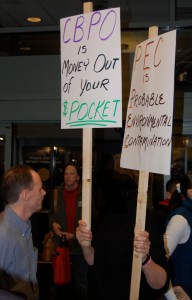 So let’s remember the source. Tom Seeman is the guy on the left next to Sally Mann (see caption), the woman holding the “CBPO is Money out of your POCKET” and “PEC is Probable Environmental Contamination” signs. Both were active in the fraudulent, and now AWOL “Loudoun Environmental Council.” LEC disappeared just in time for the real TMDL work to begin. We have more information about LEC than they do. LEC’s target, PEC, has a web site. PEC does real work. PEC is legitimate.

The big internet finds a lonely reference to LEC on Roy Jacobsen’s Linked in page. Jacobsen is Associate Broker at Long and Foster. He’s a top 1%er who may know a thing or two about dirty water and the regulatory environment that Toll Brothers operated under when they were fined $741K for clean water act violations. He must know about “Probable Environmental Contamination.” I wonder if he came up with the Rovian-squared slogan. It’s Rovian because Karl Rove advised activists to attack their opponents’ strength – PEC fights agains polluters. It’s squared because LEC’s sole purpose was to oppose regulations that would have filtered pollutants from runoff before they entered the streams. LEC represented polluters. Ha, ha, ha, isn’t that funny.

Here’s Jacobsen’s background from his Linked In page. 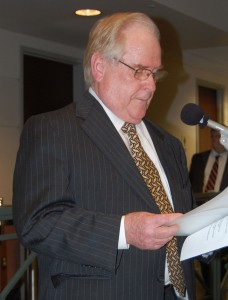 “My focus is on the Northern Virginia real estate market including Loudoun, Fairfax, Arlington, Clark and Fauquier Counties. I have had a long and diverse background in business, economic development, and real estate development, both residential and commercial.My career spans all facets of real estate—residential, commercial, new home construction, financing and lot acquisition. As a broker, I was ranked in the top 1%

LEC is gone and Jacobsen was appointed to the Loudoun Water Resources Technical Advisory Committee where he can continue LEC’s mission. The WRTAC’s first responsibility is to “Provide a quality control function for the county’s groundwater quality and quantity; surface water quality, quantity and habitat; watershed management; flood control management; and stormwater management programs from both the local and regional perspective.” It looks like Jacobsen protested himself into the position he wanted.

Sally Mann was appointed to the Courthouse Grounds and Facilities Committee and Tom Seeman to the Cable and Open Video Systems Commission. Mann continues to fight for developers by lobbying to pipe water into the Limestone overlay district.
Sally Mann and Rose Ellen Ray have also moved over to Loudoun Opt Out to join Thomas Cranmer, treasurer at Mobile Oil for thirty years and manager of “$12B oil, gas and electricity reconstruction operations in Iraq for the State Department.” A new government report found “waste and misappropriation” in those Iraq oil expenditures.

Those “LEC” folks aren’t transparent at all. They sneak around, creating and erasing astroturf organizations comprised of takers, shysters, hucksters, and wannagreeds. Tom Seeman knows all about LEC. When David and I tried to attend the LEC BBQ, the one advertised by the Tax Pig, Seeman was dispatched like a loyal Border Collie to defend the flock from us. Sally Mann booted us with much less grace than MacBeth. We never had the opportunity to discuss bio-swales with anybody at the BBQ. Some may have been interested in real low cost solutions, but that wasn’t the purpose of the affair. It was a political fundraising event and many BoS candidates, and Republican 10th CD fundraisers and activists were in attendance. They were scheming. They were trying to figure out how to get themselves elected in order to steal public resources, tax dollars, and other people’s money for themselves and their friends.

Tom Seeman schmoozes with these people and probably has a lot of good stories to tell. Next time, don’t send him away. Find out what he likes and give it to him. Invite him to dinner and drinks after the meeting. Listen to him. That’s what you do with Tom and other LCRC activists. Let them talk.