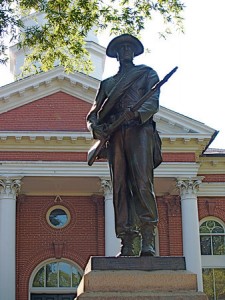 I made reference at a sentencing in the court house once, how it was “unfortunate” that such dehumanizing and tortuous methods of punishment stood directly in front of a court house when we were considering punishment in a criminal case.

According to the American Anti-Slavery Society in 1839, a slave “was placed in a sitting position, with his hands made fast above his head, and feet in the stocks, so that he could not move any part of the body.”  This took less effort than whipping.  So, it became preferred as a punishment because, well, it took less physical effort.

No doubt others thought that these instruments of torture should be removed – and they were.

Now we should finish the job – and remove the statue as well.

The Thirteenth Amendment to the United States Constitution abolished “slavery” and “involuntary servitude” and granted Congress the power to enact “appropriate legislation.” By the 1866 Civil Rights Act, black citizens enjoyed “the full and equal benefit of all laws and proceedings for security of person and property as is enjoyed by white citizens.”

Under the Amendment and the 1866 Act, what were called “badges of slavery” were outlawed.

Plainly, stocks and a whipping post were “badges of slavery.”  This statue is as well.

A Confederate soldier plainly represents what he fought for, for disunion, so that any state could ignore the constitution and break its constitutional compact with every other state, violate the law of the land, in order to preserve and spread slavery into the territories, to continue the stigma, the badges of slavery, in perpetuity.

President Andrew Jackson reprimanded Vice President John C. Calhoun at a party in 1830, saying, “Our Union must be preserved.”

Calhoun feared that, if slavery were abolished, whites would be forced into that working class, at low pay.  Calhoun asserted the right of states to nullify what they didn’t want.

In 1858, Abraham Lincoln said in Springfield, Illinois that, “a house divided against itself cannot stand.”  He said those who favored slavery were of the view, “if any one man, choose to enslave another, no third man shall be allowed to object.”  Lincoln said one object of the Scott decision was to deny citizenship to slaves so they had no rights or privileges.

All who approach this statue may rightly recall the unequal treatment before the law suffered by persons of color and how it persists to this day long after the civil war.

Many know about the kidnapping and murder in 1955 of the black youth, Emmett Till, 14, how the trial concluded with acquittals, followed by the admissions of the acquitted defendants, bragging to a magazine, how they had really done the dirty deed.

Medgar Evers, an NAACP field secretary, was killed in 1963 because he sought to overturn segregation in the South.  When Byron De La Beckwith, of the White Citizens Counsel, was tried, two all-white juries deadlocked.  In 1994, 30 years later, De La Beckwith was tried and convicted.

The NAACP came into existence about the time our Confederate Soldier was installed; the Klu Klux Klan returned re-vitalized about the same time.

Virginia was infamously known for its massive resistance against segregation.  In Loudoun, we had segregated schools, movie theaters, the pool; in fact, when directed to open the pool to black and white alike, the pool was filled with concrete.

It’s therefore no metaphorical coincidence that we have this imposing bronze soldier, the symbol of the southern nullification movement that set out to disunite our nation, confronting every citizen who approaches our courts of law.

It is long past the time when we can pretend that a confederate soldier statue is not itself a badge of slavery.

It’s long past the time when we should take it down.

80 thoughts on “Take That Statue Down!”