When we declared our independence, we said we believed that we are all “created equal.” We have struggled since to perfect that sentiment, but of late, persons of color, muslims and women are hardly treated as “equal.” END_OF_DOCUMENT_TOKEN_TO_BE_REPLACED

FROM BECOMING PRESIDENT UNLESS… 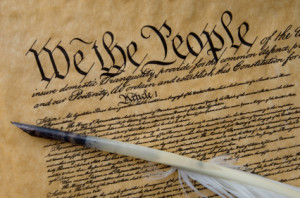 Alexander Hamilton, “One of the weak sides of republics, among their numerous advantages, is that they afford too easy an inlet to foreign corruption.”[2]

President-elect Donald J. Trump must disavow and disassociate himself from his extensive and complex personal holdings in foreign nation states, lest he blatantly disregard the constitutional prohibition that seeks to insulate the President, however virtuous, from the corrupting influence of foreign governments.

Any President-elect, in order to assume the office of President, must take the following oath:

President-elect Donald Trump will violate his oath of office and a critical constitutional precondition for serving as our Chief Executive unless, before he takes the oath, he separates himself completely from all favors and profits, so-called emoluments, from every other nation state.

The “emoluments clause” in the United States Constitution, at Article I, Section 9, clause 8, says, in relevant part, that “no person holding any office of profit or trust shall, without the consent of Congress, accept any present, emolument, office or title, of any kind whatever, from any king, prince or foreign state (underscoring supplied).”

This provision is mandatory, as expressed by the word, “shall,” and not permissive, as would be suggested were the word, “may.”  There was a similar anti-corruption provision in the Articles of Confederation strengthened in the U.S. Constitution by making the provision mandatory – “shall.”

President-elect Trump estimates his personal wealth at $10 billion, and occupies the unprecedented status as a President-elect both of having great wealth and more off shore holdings and foreign entanglements than any previous President-elect.

According to published reports, Mr. Trump has shunned all advice to date to come to grips with this looming constitutional violation.

In fact, Mr. Trump has said that, as President, he “can’t have a conflict of interest,” akin to the much-criticized formulation President Nixon once invoked, sounding, royally, as a presidential prerogative, entitling the President to be above the law binding everyone else.

Mr. Trump’s anorexic financial disclosures combined with what journalists have uncovered about his offshore holdings beg the question whether Mr. Trump can resist the understandable self-serving impulse to favor his foreign business interests over the interests of the nation.

If Mr. Trump does not cure this divided loyalty, and disregards the constitutional dictate of the emoluments clause barring his easy tolerance of the corrupt conflicting influence of foreign nation states, he risks, indeed he invites, an impeachment resolution under Article 2, Section 4 of the United States Constitution, and it will happen sooner or later, for his abject failure to insulate the office of President from foreign influence.

Mr. Trump may seem immune from impeachment given the electoral reality of Republican majorities in both Chambers of the U.S. Congress.

We should not assume, however, that party loyalty is so ethically elastic that Mr. Trump may forever enjoy an unlimited license to indulge his divided loyalty, to his business’ advantage, no matter what is the best interest of the nation. END_OF_DOCUMENT_TOKEN_TO_BE_REPLACED