Your quick-take was our tipping point, and we have committed ourselves to assisting the Browns in any way possible. In the short time we have known Sam and Uta, we have found them to be intelligent, passionate, honest and wise – stewards of the land with agricultural knowledge far surpassing our own. Such wisdom should be treasured, nurtured and preserved for Loudoun’s future generations, not abused like some inconsequential aggravation. It is a grave sign of Purcellville’s societal and political priorities that this situation has deteriorated to this point.

As everyone who looks beyond press releases from the Town of Purcellville for their information knows, the mysteriously revived “Southern Collector Road” is not really about alleviating traffic congestion at all, but rather opening up more area for the sort of “sensitive” strip mall development on display here. They’re fixin’ to use a lot of concrete – and my guess is that’s why we’re seeing Stephen Mackey, and not “Citizens for (some) Property Rights” coming to the defense of the Browns.

The silence is so deafening, and the hypocrisy so…fragrant, that one might be tempted to think that the organization had disbanded and the principals skipped town with their pockets stuffed full of cash – but wait! There’s CPR President Jack Shockey chatting up some anti-Muslim bigots and participating, wittingly or not, in the April LCRC charade: 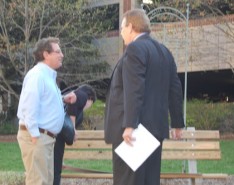 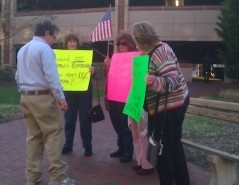 On Tuesday the Town of Purcellville began erecting, without notice, a fence around the portion of the property the Town seized in its quick-take eminent domain action, effectively cutting the Browns off from the back 45 acres of their property. This means that the Browns are being denied access to their peach orchard, hay and other crops at the height of the summer harvest season. As Mr. Mackey suggests, there is really no way to interpret this as other than vindictive, since the road construction itself is stalled by both lack of funding and legal action.

Will representatives of the Town show up to explain themselves on Sunday, as invited (“I would welcome an opportunity to personally hear your responses to this correspondence; therefore I have a video crew standing by to meet us this Sunday, July 17th at 10 AM at Crooked Run”), or be no-shows like the fraudulently-named CPR? If you’re so inclined, stop by on Sunday. I hear there will at least be a wine tasting.

2 thoughts on “‘Just say no’ in Purcellville”