[Promoted by Epluribusunum, because this story has become even more disturbing. Apparently, this so-called “pro-family” initiative is diverting funds from programs serving the victims of domestic violence. According to a more recent Pilot article, some victim advocates were told by state officials “that shelters weren’t ‘a good fit’.” In other words, the ideology driving McDonnell says that marriage counseling is more important than saving lives.]

The Virginia Pilot reports on Virginia’s latest social engineering initiative; “Governor’s plan aims to solidify families, cut poverty“, but let’s call it what it is, a rather large allocation of taxpayer dollars to infuse right-wing think tanks and faith-based organizations with cash to help them build their revolutionary base.  Revolutionary is not my term.  I attended the DoingTheRightThingEvent on Saturday September, 24 and Chuck Colson explained that “we are living in revolutionary times“.  He also said that government can’t solve the problems of culture.  “Family” and “church” have to do that.

I guess Governor McDonnell didn’t get Colson’s message because he seems to think that government should solve cultural problems by steering straight people into marriage.  He could give a damn about my marriage, no, let’s not mince words.  He thinks my marriage is an abomination and a threat to the social fabric, but that’s a story that the Governor need not mention.  He wants to fund organizations that can talk sweetly about “marriage”, but under the surface, these same organizations are cutting the availability of family planning and abortion services and barring gays and lesbians from marrying.

Can I prove the latter?  I’ve been following this debate long enough to recognize the branding.  Take a look at the logos and photos from these “pro-marriage” movements.  The photo above is from the Hampton University National Center on African American Marriages and Parenting (NCAAMP).  McDonnell attempted to award a $736,000 no-bid contract to this outfit but was forced to back down and allow competitive bidding.

Now compare the NCAAMP branding with the two organizations that are advocating for statewide anti-gay “marriage” constitutional amendments in 2011.

Not convinced?  Do these models from Minnesota for Marriage look familiar? 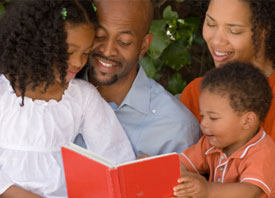 This isn’t a coincidence.  It’s coordination, and other right-wing governors are jumping on the bandwagon.  Sam Brownback of Kansas is seeking a $6.6 million federal grant (thanks to the Obama administration) and he’s collaborating with the anti-gay Institute for American Values whose president, David Blankenhorn was humiliated in California’s Proposition 8 trial.  But Blankenhorn keeps on trucking.  It’s an easy “research” living that doesn’t require the rigors of peer review.

Victoria Cobb of the Virginia Family Foundation likes McDonnell’s program.  She argues that the state has a “fundamental interest in marriage“.  Donald Wildmon, a compatriot from the SPLC designated hate group the American Family Association puts that “interest” this way in the AFA Journal.

“A dark cloud has descended on America.  Once the land of freedom and responsibility, once a culture guided by Judeo-Christian heritage, once a land where righteousness was exalted, America has been shrouded by a dark cloud.  This cloud has left us unable to tell right from wrong.  Indeed it has caused us to call wrong, right.

A seven-year-old boy kills an innocent six-year-old firl at his school.  The media blames the object – a gun – while admitting that his home life was a mockery, but never connecting the quality of his home life to his actions, nor mentioning the need for a solid, stable family with a loving and present father and mother.”

If you follow the reasoning, growth in government will actually shrink government because broken families have high maintenance costs; courts, jail, medicaid, food stamps, etc. If you close your mind to the theocratic roots of McDonnell’s initiative, it seems benign.  The Virginia Pilot article demonstrates McDonnell’s public finesse.

Without much fanfare, Gov. Bob McDonnell’s administration is pursuing a plan to reduce out-of-wedlock births, reunite unwed fathers with their children and encourage marriage as it looks at ways to shrink dependence on social welfare programs.

I don’t disagree, but would be more comfortable if McDonnell employed a bit of common sense and scientific rigor.  I reviewed the NCAAMP web site and didn’t find much in the way of science or research.  I did find a media report from the 2009 “National Summit on Marriage, Parenting and Families“.  The report concatenates media coverage.  That’s all.  There is no research. But they did bring in anti-gay coach Tony Dungy, Chick-Fil-A owner S. Truett Cathy and UVA’s W. Bradley Wilcox, a “scholar” at Blankenhorn’s Institute for American Values.  Wilcox is a contemporary of Robert P. George who penned the Manhattan Declaration.  Wilcox works with NationalMarriageWeek.org.  Not surprisingly, the National Marriage Week web site looks remarkably like the NCAAMP web site.  Lots of idyllic photos of heterosexual model families, and no scientific content.  As a matter of fact, one of the photos in this ad appear on the NCAAMP web site banner.

Thank God we have watchdogs like John Morgan, executive director of Voices for Virginia’s Children who said “I don’t question the premise,” but “some people are nervous about the ideology behind this.”