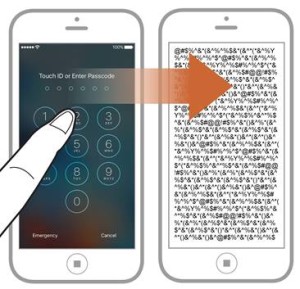 In a fairly recent Supreme Court opinion, Riley v. California, Chief Justice John G. Roberts Jr. wrote that ninety percent of Americans have cell phones and they contain “a digital record of nearly every aspect of their lives — from the mundane to the intimate.”

The government may not access a cell phone without a warrant but what’s a government going to do when that cell phone is protected from intruders by robust encryption?

They demand that Apple work for the government, create software to defeat its own encryption software.

This demand is a throwback to the writs of assistance when the British required you to help them invade your home.

The court has ordered Apple to do so.

The Justice Department claims they want to find out what’s on the iPhone of a terrorist, the focus of the San Bernardino terror attack.

As I said, there is no digital key to unlock the encryption in Apple’s software locker; they are being ordered to create one.

Given the government’s past failure to respect our privacy, is this fight with Apple about getting into the phone of the now very dead terrorist, just a pretext, to use this woefully unsympathetic, terminally absent, cell phone holder, hoping the court and public will recoil from his inhumane wasting of innocents, and, in this angry fog, agree to a digital back door to access every iPhone in the world?

The Department of Justice says, almost reassuringly, trust us, it’s just us, it’s only this one phone.

But Apple strongly disagrees and with good cause; so Apple is fighting the court order.

What’s truly remarkable is the cognitive dissonance of a public that doesn’t trust the government to leave its guns alone should the government turn on them, and is yet willing, even eager, to urge Apple to compromise the encryption that protects our privacy from the government and everyone else.

George Orwell wrote in his book, 1984, that “Doublethink means the power of holding two contradictory beliefs in one’s mind simultaneously, and accepting both of them.”

I wonder if that’s what we have when we have a distrustful public willing to yield its privacy to the government for fear they’ll otherwise be insecure – from terrorism.