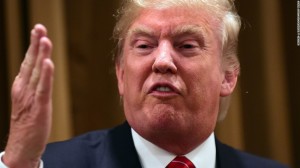 Marshall McLuhan studied cultural phenomenon and wrote how the “medium is the message” and how it forms our daily conduct. There could perhaps be no better example of McLuhan’s instruction than how reality tv has crossed over and embedded itself, compromised our “culture,” as it’s being mimicked increasingly off-camera, and is the latest in-your-face fashion this presidential season.

Still, Mr. Trump Has become the presumptive presidential nominee of the Republic Party.

He exults that his supporters know nothing, and they are so enamored of his brand of plutocratic populism, that Mr. Trump brags that they would support him, their strong man, even if he were to kill someone in broad daylight in Times Square,

Pascal made an important observation about how some fail to reconcile the promise they imagined they had with who they truly are and what they can achieve.

Most of us are made humble every day by what we strive to do, and what we are able to accomplish, and adjust and adapt to what we can and should do, and do the best we can.

As Pascal said, “Man would fain be great and sees that he is little.”

Genesis has a passage, “And slime had they for mortar.”

A large fraction of Mr. Trump’s mad following claim they’ve got something coming to them – by the fact only that they exist in some cases – and believe this “apprentice” pol will get it for them.

The legitimacy of the Republican Party is at stake as many prominent leaders are now swearing allegiance to this misfit to lead our nation, exalting party over national interest.

The Republican Convention will tell us more about the finer character of its leaders by those who stay home and work on down ticket races.

Eric Hoffer, a self-educated longshoreman, with a clear vision for mass movements, for those who “are wholly without reverence toward the present,” described some members of society who “see their lives and the present as spoiled beyond remedy and they are ready to waste and wreck both; hence their recklessness and their will to chaos and anarchy.”

These are not folk we should ignore and fail to hear and seek to redress their legitimate wrongs but freedom comes with responsibility – and that means boundaries.

The correct response to grievance is never to honor hate, division, intolerance, violence, and a remorseless indifference to the plight of our neighbors.

The standard of a civilization is how we treat our own.

Trump doesn’t get it.

In any case, our nation’s gets a chance to re-dedicate itself to the promise we made as a nation and renounce Mr. Trump in November.