According to coastal geologists, storms, development, and sea level rise have caused sections of this 200-mile island chain we know as the Outer Banks to collapse.  Shifting sands, new inlets, newly formed ecosystems are transforming the banks.  More houses on spindly stilts now rest in the surf. 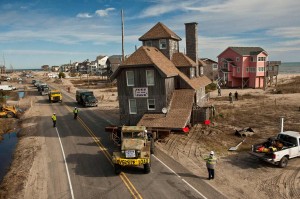 Worse, this is not just happening to the Outer Banks, it’s happening on shore lines worldwide.

And not just at vacation destinations.

In Norfolk, Virginia, we have the world’s largest naval base.  There, the seas are rising at twice the global average because of ocean currents and geology.  Norfolk is also sinking at an inch and a half every ten years.  The Gulf Stream is slowing and that is causing the waters to rise faster.  The Union of Concerned Scientists concluded that a sea level rise of 1.4 feet would mean low-lying areas would flood about 280 times a year.

The waters are putting the Naval Base and the City of Norfolk in danger.  There are waters in the street frequently.  We are talking about this region’s existence and our national security and economy.

Our several nations have failed to address global warming and the seas are rising, and, given we did little or nothing, now we have fewer alternatives to stop the seas, and must adapt instead.

None of the “new money” that the US Congress approved is going to make the Navy Yard more resilient.

The Defense Department published a technical assessment for 1,774 military sites.  Rising oceans, at a level of three feet, would threaten to submerge 128 coastal military bases.

The Congress knows about the problem, agrees it’s a national security problem, Virginia Senator Tim Kaine says Congress will work the problem, but there isn’t enough funding even to begin to cope.

The remedies cost a lot.  Billions of dollars.

The efforts at resiliency, to combat the rising waters, mean raising roads, heightening bridges over troubling waters, allowing areas to become wetlands, just giving up in some cases, raising houses on cinder blocks, modifying drainage facilities, and, when this isn’t done, because it costs, or fails to work, abandoning homes and businesses, moving inland.

Who is going to pay?  We all are going to pay unless we can issue bonds, or go after those who caused the global warming.  And we have to start because things are not getting better.

An investigative series found that Exxon was warned by its own researchers in the 1970s about the possible catastrophic consequences of climate change and Exxon then led efforts to block solutions to this impending disaster. Scientific American conducted its own investigation and found that Exxon knew decades earlier and was involved in misleading the public.

State Attorneys General pledged to investigate energy companies that deceived investors and consumers about the danger of climate change.  Attorneys for Exxon Mobil then pushed back, refusing to produce certain documents claiming an auditor-client privilege that the court pushed aside as without merit, and then Exxon came back rather suspiciously, stating they wanted to depose the several State Attorneys General who were actively investigating Exxon, really to chill their inquiries.  The litigation continues at this writing.

Of course, don’t you agree, if we find that Exxon or any other energy company knew the danger of global warming, and misled and misdirected the public, then that energy company or companies should pay some substantial portion of the multibillion dollar tab.

Otherwise, we the public will pay to retain and protect as best as we may our shore line communities and resources.