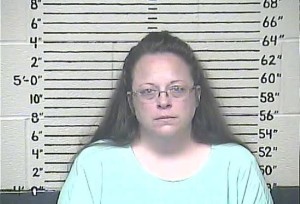 Clerk Davis said she refused “on God’s authority,” a transparent concession that she was really seeking to violate the First Amendment’s prohibition against establishing religion, by supplanting the lawful execution of her office with her personal religious belief and disregarding the Supreme Court’s decision that same sex couples have a constitutional right to marry. END_OF_DOCUMENT_TOKEN_TO_BE_REPLACED

The photo above appeared in a Gary DeMar “Godfather Politics” article titled  “Gestapo-Like Initiative Becomes Law in San Antonio.” DeMar was responding to San Antonio’s anti-discrimination ordinance, that, by the way, protects Christians. I “found” Godfather Politics because they praised Congressman Wolf (who just endorsed Dave LaRock) for his endorsement of labeling every single citizen of Saudi Arabia a potential terrorist. END_OF_DOCUMENT_TOKEN_TO_BE_REPLACED