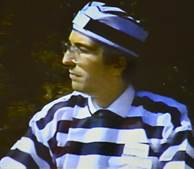 Mr. Delgaudio’s counsel said afterwards that Delgaudio “cooperated fully.”  How is it then that the prosecutor never asked Mr. Delgaudio to testify before the Grand Jury “under oath?”

Mr. Delgaudio has been a political trickster since 1987 at the helm of Public Advocate.  Mr. Delgaudio wore a black and white striped convict’s uniform that year on Capitol Hill, waved placards at passing Senators, insisted U.S. Supreme Court Nominee, Robert Bork, was too tough on crime for criminals to support him, expecting this opaque irony would somehow convince Senators to vote for his confirmation.  They didn’t.  58 Senators said “No.”  https://www.youtube.com/watch?v=0BWMgydjhOc

Delgaudio’s political theater since has only confirmed his rudeness and bigotry, particularly toward gays.

Not too long ago, Public Advocate allegedly hijacked a copyrighted marriage photo of a gay couple, photo-shopped it, and published it in a political campaign attack on an unrelated Colorado State Senator who supported civil unions.

In order to support his questionable political antics, Delgaudio raises money for Public Advocate, $1.1 million in 2011 (and he paid himself $133,000 that year). PA 990

It was little surprise therefore that the Grand Jury focused on Mr. Delgaudio’s fund-raising.

Mr. Delgaudio hired Donna Mateer as an aide but, instead of having her work on County business, responding to constituents, County staffers, and other Supervisors, Mr. Delgaudio gave her a script to arrange meetings for Mr. Delgaudio to raise funds to retire his campaign debt.

Mateer worked on County time at taxpayer’s expense.  According to the Grand Jury, “Supervisor Delgaudio was the one responsible for certifying time and attendance records for his BOS aides.”  Presumably, Mr. Delgaudio certified Ms. Mateer as working for the County when she was not.

Delgaudio told anyone who would listen that he was really raising funds for a local football league, and not his campaign.  The Grand Jury reported, however, that they heard sworn testimony that Mr. Delgaudio was not raising funds for the football league.  This was a missed opportunity for the prosecutor to ask Mr. Delgaudio under oath why his public statements were at odds with what the Grand Jury had learned.

The Grand Jury considered perjury charges for a pastor believed to serve as a conduit for cash contributors to give to Mr. Delgaudio.  An envelope memorialized a $5,000 contribution close in time to a Board vote by Delgaudio when he changed his position on the construction of a Loudoun County building.

The prosecutor was blind to any charge by the salaried Mr. Delgaudio misleading the County paymaster because, she said, he was not “full time.”  When the Board doubled its Member’s salary in 2008, the reason the Board offered was that one couldn’t serve as a Supervisor and hold a conventional job.  One Supervisor said you had to be retired or rich to serve.  Chairman Scott York reportedly said there were days you could pay him $200,000 and it wouldn’t compensate what he did for the County.

An additional question is, does this mean, the prosecutor did not consider any other possible charges, not grand or petit larceny (18.2-95,96), nor embezzlement (18.2-111), nor fraudulent entries (18.2-113), not obtaining money under false pretenses (18.2-178), nor false statements to obtain property or credit (18.2-186)?
It feels like the prosecutor proposed “reforms” as a sop for denying the Grand Jury any opportunity to vote on the testimony it considered.  It’s also ironic — the thought of reform — when our Board opposes even an ethics policy.

From the beginning of this grand jury investigation, it was clear it was going nowhere.   This same prosecutor would have had to reverse her first opinion, before there was a Grand Jury, when she cleared Mr. Delgaudio in record time.

Some asked months ago, why do we need to file a petition by the citizens of Sterling to remove Supervisor Delgaudio?

It’s because only the people can possibly rid themselves of politicians like Supervisor Delgaudio.

60 thoughts on “Prosecutor Punts on Delgaudio!”