There are many instances to insist on science as your guide this year.  The Science March itself was inspired by the Women’s March, and has been characterized by the slogan, “There is no Planet B.”

Lovettsville’s Judy Randall and Terri Glass also made the march.

Terri recently said, “When 99% of climate scientists agree that our climate is changing and it’s largely due to human activities, that’s about as settled as science ever gets. Denying this reality is like ignoring a 99% consensus of doctors agreeing that you have a chronic condition that could be helped by diet and exercise simply because you don’t want to change your behavior. The difference is that it is only yourself that you are killing.”

Judy, a well-regarded science journalist for most of her life, said, “The march was inspiring.  There was a sign that said, paraphrasing Huxley, ‘Arguing with facts don’t make them untrue.’  I enjoyed one sign that said, ‘Make America smart again.’  I also stood alongside a woman who worked for the EPA.  Her area of concern is pesticides.  She was concerned.” 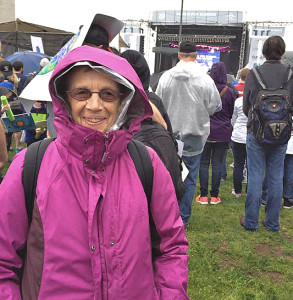 Many who didn’t go to the march because of the rain, watched on C-span and NPR and online including the shared videos, photos and comments on social media.

There were some powerful speeches including what Cara Santa Maria said, “The very idea of evidence and logic and reason is being threatened by individuals and interests with power to do real harm.”

On earth day, an important theme of course was global warming.  There are still climate deniers who, despite melting ice caps, dying species, rising waters and temperatures, either deny global warming exists or that humans are a factor in the warming.

The EPA scientists have been “discouraged” from speaking their scientific mind and doing what they’ve done in the past.  EPA regulations on carbon emissions are being gutted.  Funds for research are being cut.  The nation is reneging on treaties on climate change.

The National Academies of Science (NAS) has pushed back against non-scientific explanations of the origin of man and the planet: “Creationism, intelligent design, and other claims of supernatural intervention in the origin of life or species are not science because they are not testable by the methods of science.”

When it comes to space and time, Copernicus’ theory challenged the notion that earth was the center of the universe, costing those who agreed with Copernicus a visit by the Inquisition.  Most have “come around” on this point but there are “hold-outs.”  Nor have we persuaded some “flat earthers” – truly retro observers of the world around them who must not travel much and must fear falling off the earth.

There is opposition to stem cell research to regenerate damaged cells because some religions treats the cells as a “life in being.”

Over at the Justice Department, embattled Attorney General Jeff Sessions is putting to an end the Department’s partnership with 30 independent scientists, judges, crime lab leaders, prosecutors and defense lawyers who seek to raise scientific standards from forensic junk to peer review quality.  Tracing bullets has been proven to scientifically unsound, same with bite mark “analysis.”  Only a few years ago, the Department had to concede that its hair analysis was mistaken or over-stated.  Many convictions have been set aside.  Peter Neufeld, a co-founder of the Innocence Project with Barry Scheck, said, “the department has literally decided to suspend the search for truth.”

As Judy said at the Science March, “Y’all need some science.”