There are many instances to insist on science as your guide this year.  The Science March itself was inspired by the Women’s March, and has been characterized by the slogan, “There is no Planet B.” END_OF_DOCUMENT_TOKEN_TO_BE_REPLACED 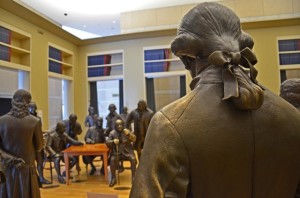 The party of President Richard Nixon, who created the EPA, at first by Executive Order, cared deeply how humans were compromising the quality of air that we breathe and the water we drink, has now elected a man who has nominated an Oklahoma AG who does not believe humans have any adverse effect on the environment. END_OF_DOCUMENT_TOKEN_TO_BE_REPLACED

Accepting that it’s impure, how “safe” is our water?

The answer is we have cause for concern.

The reasons are obvious in Northern Virginia.

There is the increased density of our population, the accompanying development, the large number of households that use wells, the bad practices that many of us follow that can compromise the water’s “purity,” and, perhaps worst of all, the waste products that industry is allowed by law to dump into the water, also what industry dumps that is unlawful (that it’s not supposed to discharge), and how weakly the feds and the state push back against those who pollute, allowing the general public to absorb the cost and risk to their health and mortality.

We don’t always think of the cycle of water that we take for granted. END_OF_DOCUMENT_TOKEN_TO_BE_REPLACED