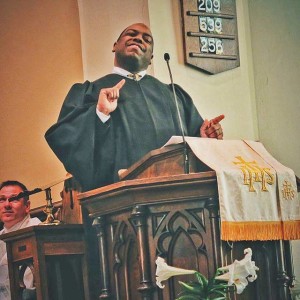 Guy said, “I’m angry because these children are doomed to a life of unrelenting medical care. How is it that, in 1978, we took lead out of paint, but we have lead in water in 2016? That’s why I’m raising this money, to help these poor people.”

There were early warning signs, starting in April 2014, when Flint residents complained that the water looked and smelled bad, and caused rashes.

In July 2015, the Health Department’s Chief of Staff, Dennis Muchmore, wrote, “I really don’t think people are getting the benefit of the doubt.”

A member of Muchmore’s staff, an epidemiologist, found elevated blood lead levels among children under 16. This damning report about the children was, however, suppressed and only later unearthed by a FOIA request.

Although the water supply is now switched back to the Detroit system, efforts to coat the pipes haven’t worked. Lead filters don’t fit all the sinks and don’t seem to be working.

General Motors issued a statement that the Flint water caused corrosion, and was not safe for its cars.

“If General Motors has enough sense not to use the water on an inanimate object, on a car,” said Guy, “then, why is ok to use it on a child? It’s a sin and shame what’s happened here.”

“The problem here is that the water is the symptom that we can see,” said Guy, “There’s much more going on, underemployment, poverty, blight and crime.”

“Our witness to the world, to borrow from Paul, is of sounding brass, and a clanging cymbal,” said Guy.

Guy said, “I just can’t abide seeing injustice done. We have a duty to stand up for people who can’t stand up for themselves. I’m asking others to stand with me.”

This nation has lost heart, and is more indifferent to those less advantaged than any time in my life. This is a story about Flint but it’s also about the rest of the nation.

4 thoughts on “Don’t go near that water”