Business and development are not synonyms.

As Loudoun’s 2011 election season heats up, it is worth remembering this simple fact. Many candidates and campaigns will spend the time between now and November trying to conflate the two, though they are quite different. Often, you will see candidates who are in favor of careful consideration of development, what has been termed as “smart growth” in the past, lambasted as being “anti-business” or even “anti-job,” when nothing could be further from the truth.

In fact, the best way to be pro-business in Loudoun County is often to examine questions of development with an eye towards their economic impacts and benefits. After all, every development application is, by its very nature, a short-term zero-sum game. The decision to use a parcel of land for one purpose necessarily eliminates the option to use to another purpose, at least for the foreseeable future. Loudoun has seen this principle in action over the past decade, with the decision on, and subsequent collapse of, One Loudoun being the most striking example.

You will recall that One Loudoun was supposed to have been an engine of business growth at a perfect, unique location. In fact, it was billed as a centerpiece for economic development in the County. But a funny thing happened on the way to paradise, One Loudoun’s developers went bankrupt, and the residents of Loudoun have gained nothing in terms of revenue, job growth or economic development from that once-paragon project.

This is why all questions of development must be examined closely, and with a critical eye. Development, by necessity, means permanence. And the costs and risks of a wrong decision echo through the county for decades.

Leesburg’s own Supervisor, Kelly Burk, is the Chair of the Transportation and Land Use Committee on the Board of Supervisors. She takes this job as Supervisor very seriously. When making a decision for the County, she considers not just the short-term, but also the long-term impacts of that decision. This is true for everything she does, from budgets to zoning to, yes, development decisions.

Witness, for example, the process that the Loudoun Hounds baseball stadium went through for approval. Supervisor Burk was at the center of that process, working with all stakeholders and eventually forging a compromise that allowed baseball to come to Loudoun while preserving critical habitats for endangered species and ensuring the benefits of the project, including much needed transportation improvements, accrued to the residents of Loudoun. The successful approval of the Stadium was the result of Supervisor Burk’s efforts, and in the end, Supervisor Burk voted “yes” because she found a willing partner in the Stadium’s development team.

Kelly Burk has made a career of working with local business communities in Leesburg and throughout Loudoun to create sustainable conditions for business, and job, growth. During her terms on both the Town Council and the Board of Supervisors, Ms. Burk has worked tirelessly to improve the business conditions at the Leesburg Airport, and has been widely recognized for those efforts by Republicans and Democrats alike. Unlike this piece of land, or that piece of land, the Leesburg Airport truly is a unique factor in Loudoun’s economic engine. It’s enhancement and protection creates good, long-term, high-paying jobs that return revenues to the County’s coffers and bring business to the County’s companies.

Furthermore, Supervisor Burk has actively, and regularly, put together events to find jobs for her constituents. She has sponsored two annual job fairs (so far) that connect local businesses with young people looking for work. In this, she has directly addressed the single largest portion of Loudoun’s unemployed: young people. No one else in Leesburg, on the Board or on the Council, has pro-actively connected employers with job seekers as a regular part of their elected duties.

All too often, Republicans in Loudoun County equate development with economic growth, when all evidence is to the contrary. Indeed, in the past few years, Loudoun’s growth has come not from development (witness, again One Loudoun), but from the expansion of Loudoun’s existing businesses and the development of new ones. It is this kind of economic development that brings good, long-term, well-paying jobs to Loudoun. Those are the kinds of jobs that improve Loudoun’s revenue and can sustain our success.

Perhaps this is why so many businesses in Leesburg, and throughout Loudoun, trust Supervisor Burk. They come to her with their problems and concerns, and she looks for ways to help. And more often than not, like with the airport and the job fairs, she finds ways to help, and makes them happen. That is putting Leesburg first, and that is the job of a Supervisor.

END_OF_DOCUMENT_TOKEN_TO_BE_REPLACED

(originally posted on my blog, “In Through the Out Door“)

It’s been a while since I’ve posted here, as I have been posting most recently on Loudoun Progress. But this will be my last blog posting, of any sort, for a while.

I moved out of Loudoun County earlier this month, to Reston. While I leave behind a lot of friends I made in the past 6 years that I called Lansdowne my home, I also leave behind weariness of the divisive nature politics brings with it.

When I left Loudoun, I was serving dual roles as both the Treasurer of the Loudooun County Democratic Committee and Ashburn District Chair. I was also the Chairman of the Lansdowne Homeowners Association Communications Committee. All of those roles have been vacated, and my sole focus as I begin my Reston chapter is to spend time with my wife and 5 year-old son. No more politics for me, for the time being. I won’t be joining any political committees or campaigns. I won’t be sporting bumper stickers or buttons. I won’t be reading or contributing to the blogs. I want a clean break.

Make no mistake, I will still support candidates (most likely Democrats, but I can’t rule out independents), both with my vote and my checkbook, who I believe are the best people for the job. But I won’t have to pledge support anymore for candidates who don’t have a clue as to why they’re running.  I was happily independent before my time in the LCDC, but always leaning left. I really want to get back to that again.

So, in closing, I wish the best for Liz, Evan, and David – keep LP going stong. We made it one year when critics said it wouldn’t last. It’s not “goodbye”, but “see ya later”, to Tammi, Erica, Lowell, and Jeff. You were the inspiration for me getting started in blogging. It’s “Good Luck” to Jennifer, Al, Mike, Valdis, and Dave – you all will make great public servants when you win.

And now it’s time for me to run.

I “liked” Randy Minchew’s campaign page on facebook and posted a few factual comments.  Within 30 minutes, the comments were removed and the campaign “de-liked” me.  What kind of transparency can we expect from Randy, none?  What kind of “virtue” can we expect?

Here’s a screen capture of the removed content.  It seems to me that a moderate candidate would at least be willing to discuss the root cause of the deficit and not lay the entire blame on President Obama, but not in Loudoun in 2011.  What a shame. 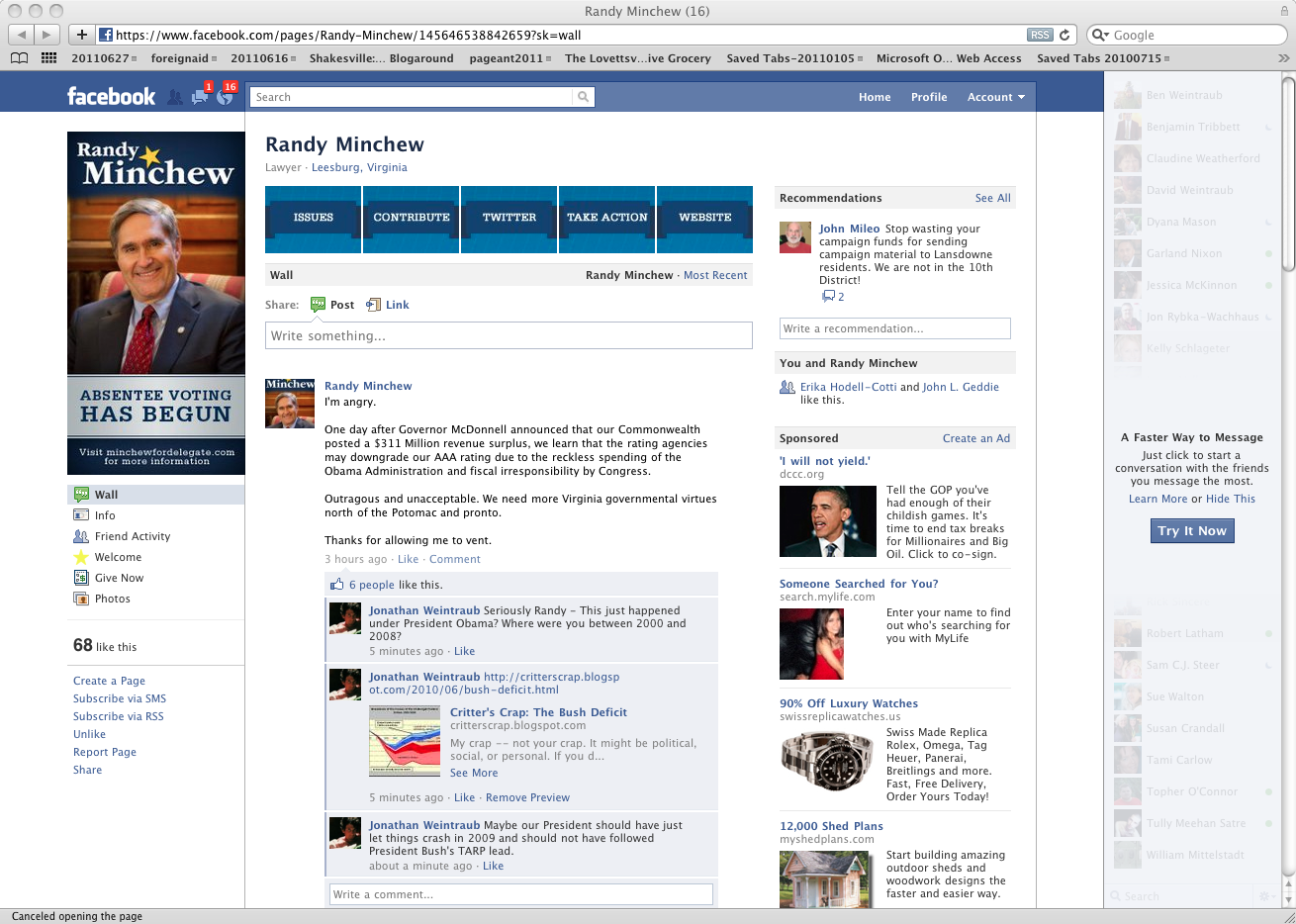 Having just learned that Senator Mark Warner (D-Va) is a member of the gang of six, I’ve lost all hope in the Democratic party. Independents like Bernie Sanders are the future and our only hope within the predominately two-party system.

END_OF_DOCUMENT_TOKEN_TO_BE_REPLACED

All, I am working on a page over at Doorbell Queen that will end up listing all the campaign websites for all the declared candidates for every office on the ballots in Loudoun this November.

If you know of a link I’m missing, please drop a link either here or on the Campaign Websites page.

I have posted all the links there without comments, even though linking to Eugene Delgaudio and Dick Black made me throw up in my mouth a little.